Who is Blessed Bob? 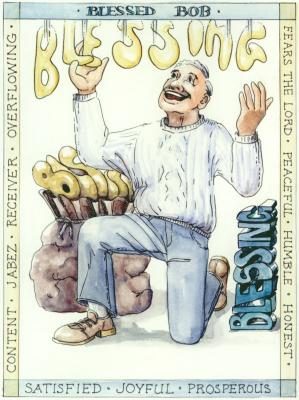 Blessed Bob is very fortunate. He recognizes that good things come from God! God is shunned by many, but not by Bob. Bob loves God. He wants to receive all the good things that God has for him. He's not too proud to ask God for help. In fact, Bob prays often. Some think that he prays without ceasing. But he is not without fault. Blessed Bob makes many mistakes, and when he does, he admits his errors. He abandons them and presses on.

Bob gets so many blessings he feels overwhelmed. His cup overflows. But he doesn't hoard his blessings. Like Generous Genevieve, Blessed Bob likes to give to others. He is truly prosperous, even though there are many who are financially richer than he is.

More recently we have examples of those who have lived with the same life focus. R. G LeTourneau was the inventor of the largest earth moving machines in the 1930's and 1940's.  He credited God for his tremendous success. He gave away much of his wealth while he was still living saying that, "When I shovel money out to God's interests, God shovels money back to me, but God's shovel is bigger than mine." He was called the mover of men and mountains because of his great work and influence. On his gravestone, R. G. LeTourneau left all visitors with these words, SEEK YE FIRST THE KINGDOM OF GOD AND HIS RIGHTEOUSNESS AND ALL THESE THINGS SHALL BE ADDED UNTO YOU  MATTHEW 6:33.

Blessed Bob is full of joy. He is satisfied with life!

Does your attitude toward the Bible affect your wealth? (13:13)

What is more desirable than great wealth? (22:1)

What is the best source of welfare and provision? (10:3)

What is the best way to transfer wealth between generations? (13:22)

What is the financial secret to stable government? (29:14)

When should you sell for money rather than give for free? (11:26)