Who is Steady Eddie? 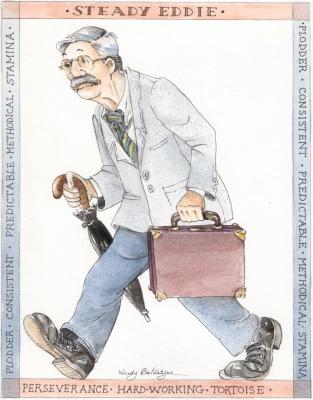 Steady Eddie is a rather boring person. In Aesop’s fable of the tortoise and the hare, Eddie is the tortoise. He’s a plodder; he’s consistent; he’s predictable; he’s methodical. One of the greatest inventors of all time, Thomas Edison, defined genius as “One percent inspiration and 99 percent perspiration.” Steady Eddie doesn’t have the full one percent of inspiration but he generates perspiration and produces good results.

Charles Walter, a highly-experienced financial planner and insurance agent, said that after decades in the business he has observed the following: It’s not the educated and talented who usually win, but the plodder with stamina and perseverance.

Steady Eddie often shows up in financial planning literature to some degree. For example we catch a glimpse of him in that best seller, “The Wealthy Barber.” Barber Roy, the main character in the book, “hadn’t missed an entire day of work in thirty-seven years for any reason. He even opened on the morning of his daughter’s wedding.” Wow! I’ve known people who haven’t had a sick day in ten years, but thirty-seven—now that’s impressive! (It’s also fictional!)

It boils down to this: In order to make many financial strategies work, we ourselves need to keep working and generating cash flow. Without the steady cash inflow we will continually change our strategies to meet unexpected bumps and potholes in the road. Without the discipline of work we often lose our own health and sharpness.

Steady Eddie won’t quit his day job to become a singer. He’s not glamorous. He’s not intellectual. You might say that he is rather boring—and you’re probably right, but I’ll tell you another thing about him: Eddie’s not broke!