It is the blessing of the LORD that makes rich and He adds no sorrow to it. 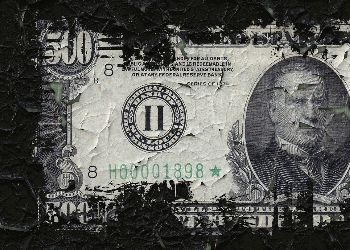 There are two kinds of riches, those with and those without sorrow.

Clearly no one wants riches with misery.

How can you get the right kind of wealth - wealth without sorrow?

From the text we learn that riches in and of themselves do not dispel sorrow and buy happiness. In fact, the exact opposite may be true; wealth often comes with sorrow attached! Who wants it? Only those who naively make money their primary pursuit. When riches bring sorrow, they do not represent the blessing of the LORD.

Who is the LORD ?

When we see the word “Lord” all in uppercase as “LORD,” it refers to the personal name of God.  It appears first in the Bible in Exodus 3:13-15 where it translates as “I AM WHO I AM,” comprised of the Hebrew equivalent of the letters YHWH, the proper name of God. For many years YHWH has been transliterated at Yahweh. Sometimes it is translated as Jehovah, which combines the consonents of YHWH with the vowels of Adoni.

This is the proper name of a person; it is not the label of an office or a position.

The convention of all letters in uppercase in LORD (as opposed to Lord) alerts the reader that it is a different Hebrew word. We find an example of the two different words appearing in the same sentence in Hebrew yet translated with the same English word, except for the upper and lower cases in Psalm 110:1.

I will say it again: This is the work of a specific individual, not a principle, force, ethos or concept. When it comes to money, it's a very important distinction This person, the LORD, can customize blessings - tailor made. Five dollars with God's blessing can benefit you more that $5,000,000 without God's blessing. 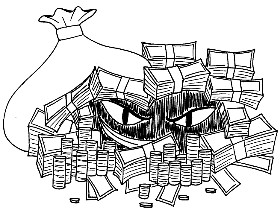 The Hebrew verb “he will enrich,” עָשַׁר (ʿāšar, pronounced “aw-shar”), is used first in Genesis 14:23. Abram was adamant to take nothing from the king of Sodom lest it be said that the king of Sodom made Abram rich. Clearly Abram spoke of visible, tangible wealth for everyone to see as opposed to intangible treasures of health, family, and happiness. Abram wanted it to be absolutely clear to all that he had no interest whatsoever in the physical and monetary assets of the king of Sodom, as if it was dirty money.

The Hebrew noun translated here as sorrow, עֶצֶב (ʿeṣeb, pronounced “eh-tseb”), is used three other times in the Old Testament. The root word in Hebrew relates to physical pain as well as to emotional sorrow. For example, ʿeṣeb is used first in Genesis 3:16, where it refers to the pain and sorrow that would accompany childbirth after Adam and Eve sinned against God. This word is also translated as hard work  (God's Word Version), difficulty  (International Standard Version), toil  (Jewish Publication Society) , pain  (Literal Translation of the Holy Bible), trouble  (Tree of Life Version, The Scriptures 2009), and grief  (Young's Literal Translation). Work and responsibility were God-ordained before sin entered the world, but sorrow and pain came as a result of human rebellion.

The Bible uses this specific word for riches to refer to assets in excess of basic food and clothing. Of the seventeen times it is used in the scriptures, it always refers to literal, monetary riches. It does not refer to intangible benefits or treasures. The money that comes from God is pure. There are no strings or conditions attached!  The classic Bible commentaries such as those by Matthew Henry, Matthew Poole, Barnes' Notes on the Bible, the Pulpit Commentary and others, all give the same message summarized best in the Geneva Study Bible, "All worldly things bring care and sorrow, whereas they who feel the blessings of God have none."

When God makes us rich, He also wants us to be joyful, not full of worry. If we sense sorrow, anguish, or grief in the pursuit of wealth, it's likely that we're off track. Polluted wealth is not the kind the LORD wants us to have. It may be because we are putting the wealth first—ahead of God Himself. We may be totally unaware of the associated troubles that will come. Money itself is not evil, it’s the love of money that results in all kinds of evil (1 Timothy 6:10). For example, when the Gehazi, assistant to the prophet Elisha took treasures secretly, the LORD allowed Gehazi to keep them but with a terrible new sorrow—leprosy. Read the whole sad story in 2 Kings 5:1-27. 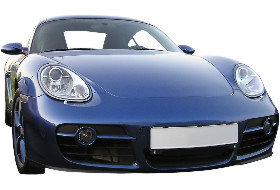 Peter and Elizabeth often discuss the nicer things that some of their friends and relatives have. Peter would like to have a car that is even more expensive than what his friend Jack owns, while Elizabeth’s desire is to have a bigger and nicer home. They both believe that once they have achieved these goals, they will be happy.

Elizabeth and Peter often feel inferior to people who have higher incomes or nicer and more expensive things. Elizabeth and Peter frequently buy things on credit, and as a result they have accumulated significant debts. They are now feeling a lot of pressure from several creditors, resulting in significant tension between the couple. They have visible wealth but it's mixed with grief and sorrow. That's not the kind of wealth blessing that the LORD loves to give.

Often the LORD allows us to have things we insist on having, although they are not be the best for us. For example, Jesus allowed the rich young ruler to keep his wealth and to walk away from Christ (Mark 10:17-22). We know for certain that the thought of selling all he possessed and giving it to the poor made him sad and grieving. Clearing the prospect of exchanging treasures on earth for treasures in heaven was not an exciting business deal in the mind of the rich young ruler. What good are treasures in heaven? Who can eat pie in the sky?  He wanted treasures here and now. He did not have faith to see the unseen and without faith it's impossible to please God (Hebrews 11:6). The rich young ruler got to keep his visible wealth, but his sorrow remained with the wealth. On the other hand, the text speaks of something better, namely riches without sorrow, the kind the LORD loves to give! Is there some criterion which God uses to determine who gets them or does God just arbitrarily and capriciously decide to give pure wealth to some and withhold it from others?

The criterion may revolve around one concept: Humble faith. Many times we are told in the Bible that “God opposes the proud but gives grace to the humble,” (Proverbs 3:34, James 4:6, 1 Peter 5:5, Daniel 4:17b). We are also told that the righteous shall live by faith (Romans 1:17, Galatians 3:11, Hebrews 10:38). I believe humble faith is the key to receiving true blessing. Furthermore God uses periods of material wealth and poverty as teaching tools, rather like training seminars to teach us humble obedience by faith. It seems that God will not grant purified riches to those who are arrogant, conceited, and wise in their own estimation. They may get rich, but only with sorrow, worry, and grief.

How did Jesus handle sorrow? He was called the “man of sorrows and acquainted with grief,”(Isaiah 53:3). Jesus actually invites sorrowful workers to come to Him. He says, “Come to Me, all who are weary and heavy-laden, and I will give you rest,” (Matthew 11:28). Furthermore, we are told to “cast all our cares on Him for He cares for us,”(1 Peter 5:7).

How can Jesus give rest to all who dump their sorrows and troubles on Him? Does Jesus have unlimited resources?  How can a mere mortal man make such a universal invitation and not fear the consequences?

There are only three possible answers:

Which of these steps, if any, does Jesus want you to take first? Ask Him.