Who is Diligent Daniel? 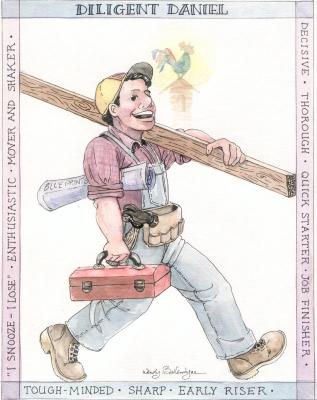 Daniel is tough-minded and sharp. He tells himself each day, “I snooze- I lose.” He pushes himself and calls himself lazy. He is tough on himself—not rough.

He’s the one Benjamin Franklin was thinking about two hundred years ago when he came up with the maxim, “Early to bed, early to rise makes a man healthy, WEALTHY, and wise.” Daniel’s also the one the author Oswald Chambers described with the words, “The heights by great men reached and kept, were not attained by sudden flight, but they while their companions slept, were toiling upward in the night.”

Daniel is more of a thinker than Steady Eddie, but is known for his enthusiastic work capacity, not his brilliance. He’s a mover and a shaker. He’s not afraid to get his hands dirty and is in good physical condition. He’s a builder. He starts the job right away and gets it DONE. He doesn’t flip-flop in this thinking. He is not double-minded. He remains humble while exuding confidence.

One of his favourite financial tools is the Registered Education Savings Plan (RESP).

From where does Superwoman get her super powers? (31:30)

What are two essentials for financial success? (6:6-11)

What can you do to flourish financially? (10:4)

What do eating styles reveal about working styles? (26:15)

What does God absolutely hate in business? (20:23)

What is your full compensation package? (10:16)

What should you treasure besides financial wealth? (2:1-8)

Why are some satisfied and others just complain? (13:25)