Who is Generous Genevieve? 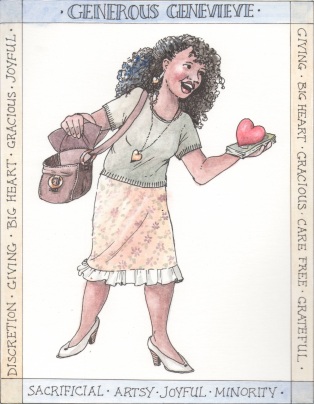 Generous Genevieve loves to give and has a big heart. Sometimes she chuckles to herself as she gives her gifts. Now here’s a secret about her giving: She only gives to those who really need it—not just to anyone who asks for a handout. She gives because she thinks it’s the right thing to do.

Strangely enough, the more she gave to those in genuine need, the more she got back. Some people give in order to get, but she considers that mere trading. Generous Genevieve gives for the sheer thrill of it. By giving she is keeping herself from emotional cancer. Emotional cancer, also known as greed, can take over one’s heart and destroy their ability to enjoy even the simple things of life. Genevieve gives in order to increase her giving capacity.

Sometimes it hurts Genevieve to give. Sometimes she is short of cash because she has given to someone else, but that shortage doesn’t last long.

Genevieve believes that there is always a reward for giving to those in need. She thinks that her generosity will come back to her benefit sooner or later. She coined the expression, “What goes around—comes around.”

How can money restore relationships? (21:14)

How can you ensure your economic security? (28:27)

How does your speech affect your finances? (12:14)

What is a surprisingly secure investment? (19:17)

Why and how should you evaluate charities? (22:9)