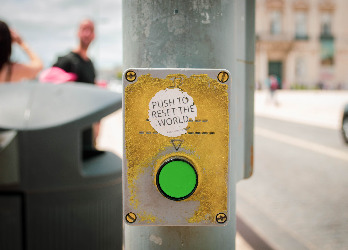 Can you remember last time you pushed the reset button on your phone or computer? Pushing a reset button is usually a non-event. Most electronics are designed with reset buttons, used to get everything working properly again. They normally restart the system quickly. Simple. Easy. Painless. What about “The Great Reset” politicians are talking about? Will this be as easy as pushing a button? And, more importantly, will it really improve our world?

Reset buttons exist because technological systems have a “manufacturer's default” they can revert back to. Here's the problem as I see it: The global financial system is not a piece of electronic engineering with default working conditions, at least not yet. Global economic and banking systems were not designed for a “Great Reset."

There's no denying that governments around the world have been overspending for decades. Some countries, like Greece, have been forced into frugality and belt tightening. Others, like America, Japan, and the major European nations, have been essentially printing money to avoid short-term economic pain. This is very unsustainable! Sooner or later the explosive expansion of the money supply without a corresponding productivity increase brings hyperinflation. Like the laws of physics and mathematics, there are also laws of economics that must be followed or disaster strikes. For example, Economic Law 101: “When your outflow exceeds your income, your upkeep will be your downfall.”

We certainly do need a change—a major change of direction. There are no easy solutions. In my opinion, a "great reset" is the right idea, but as currently prescribed, the wrong solution. We need to get back to the basics, not attempt to creatively redesign the fundamental laws of economics, as if we could just imagine a new world into reality. Truth be told, which albeit is an inconvenient truth, what we really need is a great repent, not a great reset.

The great repent must start with the Christian Church, the “pillar and support of the truth.” The church itself needs to repent of snubbing God, disdaining the Bible, and supressing truth. A popular response to truth is that truth doesn't exist. Think about that. If someone says "Truth does not exist," are they right? If they insist that they are right, then they have just established a truth and thereby proven themselves wrong. This statement is self refuting. It ignores reality. It seems to me that we are overdue for a major financial reality check, demonstrating to all that truth never changes. Either we humble ourselves (painful) or we get humbled (very painful).

By all indications, the Canadian government is avoiding any financial repentance and is encouraging the Great Reset as outlined in the United Nations General Assembly World Economic Forum: https://www.weforum.org/great-reset#articles

USA and Canada were often seen as "the lands of opportunity" for those with initiative and a good work ethic. Instead, we are moving towards a dehumanized system with the wrong ideology where blind acceptance of government rules and regulations are rewarded with monetary handouts and tax credits. Fortunately, not all Canadian politicians agree. Jason Kenny Premier of Alberta, does not like the idea, but he may not be able to stand against it. Listen to his opinion: https://www.youtube.com/watch?v=DllYfbvbsTU

Some have described it as Bretton Woods 2.0, but this comparison is disconnected from historic and current realities. We can't change the past, but we can learn from it. Unfortunately, many in the Canadian federal government are trying to save the planet while destroying the nation. Misguided altruism. I found the following videos helpful:

(The second video is by Catherine Austin Fitts, and it has been censored numerous times by American Big Tech. You can read a quick biography of her here.)

A Great Reset is coming. In the next article on this topic, I want to provide some specific steps on how to get ready.

Spiritual Secrets to Successful Money Management - Part 2 of 7: Serve Others