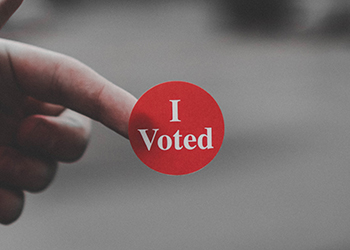 I love my day-job, but I admit that I thoroughly enjoyed my foray into the political arena. Like many Canadians, I am dissatisfied with the big political parties. When I discovered the Christain Heritage Party (CHP) and personally got to know its leadership, I was impressed. Finally, a party with values based on unchanging principles of law, order, truth, and love. It’s far more concerned with being scientifically correct than politically correct. I found it to be the only party with a message of hope. A blast of fresh air.

In September both previous CHP candidates in the riding of Bow River backed out, and since I lived in this riding I was asked to step into the fray. Having received proper clearance from Portfolio Strategies, and most of all from my wonderful wife, I agreed to run.

The campaign was exciting and invigorating. During the door knocking I was surprised and saddened to see many vacant houses in small towns—and even in downtown Strathmore. The Alberta recession is real!
I remember a trailer park in Irricana, where I walked toward one particularly dilapidated unit around 6PM. A crooked, paint-deprived fence surrounded it. Its gate was held together with bungee cords. I was tempted to skip this place, wondering if anyone lived there. No, I thought, my commitment was to every dwelling. A middle-aged woman answered the door in a housecoat with her hair in a mess. Her smile revealed one single tooth. She was pleased to get a visitor, and after I gave my one minute speech said that she would likely vote for me since no one else from any other party came to her house. I thanked her, and gave her the CHP pamphlet, but then as I walked away I wondered if she would even remember the date of the election or know how to get to her polling station. Door knocking is an education

Overall, I answered questions from five newspaper reporters, had one radio interview, presented in four school gymnasiums, and spoke at three Chambers of Commerce. Our team distributed over 10,000 pieces of campaign literature either by door knocking or mail-out. We made many new friends, and now have a desire to explore more of our riding.

The name “Christian” made us radioactive to some. Many don’t want Christian values imposed on their lifestyles. Ironically, Canada’s strong Christian heritage made it one of the most desirable countries on the globe. It still is. But ideas are changing. New ideas bring new consequences.

A new civic religion (I call it the Green Rainbow Religion) is being forced upon Canadians. Those who resist are marginalized or shouted down as haters. A hater is someone who doesn’t agree with you.

The vote count was disappointing—a harsh reality check. Out of 55,372 votes, I got 453, or about 0.8%. Most Albertans were afraid of voting anything but Conservative. I was encouraged by the words of Jim Enos, the Ontario CHP president, “Our primary goal is to influence policies and thinking, not to win the vote count.” I learned many lessons. Being a public servant in Canada—especially in politics—is NOT easy.

I know the financial planning response time was slower in October. I’m thankful that the stock markets were calm. Thanks for your patience and encouragement.

I might run again. For me, the experience was like a vacation with a purpose, but I am certainly not planning to quit my day-job. 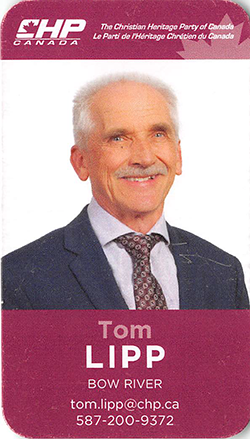 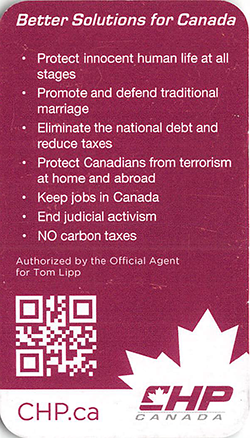