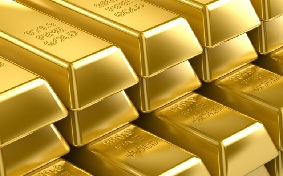 Recently, I read an article in the Financial Post saying that some States in America (15 to be specific) are aggressively looking at establishing their own local currencies based on a gold standard. The Colorado Honest Money Act, the Vermont Dollars bill, and the Georgia Constitutional Tender Act among others exemplify the deep frustration with the massive printing of U.S. dollars during the past four years. Quoting from the Post: “Once the domain of crackpots and wingnuts, a growing number of Americans believe returning to the gold standard or bringing gold coins back into circulation, is the only way to restore sanity to the fiscal system that is out of control.” In Utah, a law went into effect in May making gold and silver coins legal tender and exempting the exchange of coins from income or sales tax liability.” Imagine that, the establishment of new local currencies. It makes me remember the Master’s words: “A kingdom divided against itself cannot stand,” Mark 3:24.

When the devastating tsunami hit Japan in early March, and obliterated the inhabited shoreline, the Japanese stock market fell sharply. Everyone understood the damage was in the multi-billions and it would takes years to rebuild. But when North American markets collapsed in early August resulting in a trillion dollar loss, what physical destruction had occurred? Well…errr…nothing! But if we say it was just a bubble bursting, then how many more will burst? I’ve never liked the words “market correction,” because they imply the markets were in error. Why has the world lost confidence in the American dollar? Can it be regained? Many are longing for a return to gold-backed currency since fiat or paper currency is only as good as the confidence in a government’s ability to support the paper with real goods and services. The rise of local currencies is a sign of deep distrust in the national currency.

I was surprised to learn that the creation of local currency has happened before in North America. Depression scrip was used during the 1930s as a substitute for government—issued currency. Because banks temporarily closed due to the lack of physical currency, someone had to come up with another form of currency to keep the economy going and a way for trade to continue. At one point, the U.S. Government considered issuing nationwide scrip on a temporary basis, but that idea was quickly shot down by the US Secretary of the Treasury. Of course something like that would never happen in Canada… Or would it? In 1936 when Albertans were in the middle of the Great Depression, the Alberta government printed its own currency, separate from Canada as a whole. It came in denominations of 1 (ONE) DOLLAR and it was called the Alberta Prosperity Certificate. 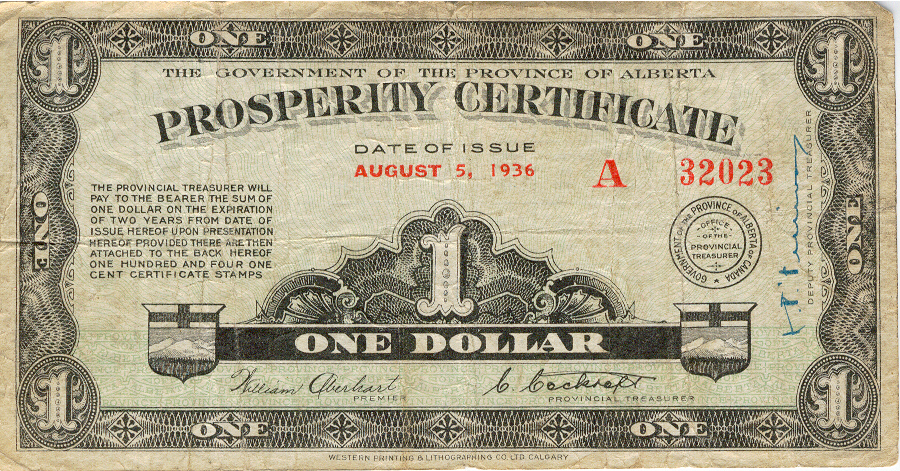 This currency did not last long but it demonstrated the leadership of William Aberhart to assist ordinary Albertans during the collapse of the banking system. A fiat currency (the word “fiat” comes from Latin meaning, “let it be deemed so”) can be based on something as simple as paper or plastic. Its worth is derived from the mutual understanding among its users. A fiat currency is based on a social contract, but social values change. What’s politically correct today may be unspeakable tomorrow. In this case, I appreciate the words of French Philosopher Voltaire: “Paper currency eventually returns to its intrinsic value…zero.”

The Canadian banks are some of the best in the world, but Canada is a one trillion dollar economy in a 60 trillion dollar world. We don’t make worldwide waves; mostly we just ride them. In highly volatile stock markets where confidence in some currencies (especially the U.S dollar) is waning, individuals—and even nations—are flocking to gold as a haven of real value. But be careful: Remember that gold is a stupid piece of metal that does nothing. It's loyal but lazy. It pays no interest and no dividends. It employs no one. It just sits there and looks pretty. Gold is a refuge of last resort. If we put all our investments in gold, who will buy the equipment needed for fishing, farming, and manufacturing? We need to improve our productivity in the Western World and investing in gold is going in the wrong direction.

Yet gold has always been cherished. It is portable, sub-dividable, easy to use in trade, and internationally regarded as precious. There is strong Biblical evidence for the enduring value of gold. The Bible, from its second chapter to its second last chapter, speaks highly of gold. We read about the gold being “good” in Genesis 2:12 and gold being “pure” in Revelation 21:18. Gold is seen in the Garden of Eden, the Ark of the Covenant, and the city of heaven. From my analysis no other commodity, with the possible exception of water, receives such broad Biblical respect. The official coinage of Israel, was a shekel (a measure of weight) of gold or of silver of the sanctuary. The monetary system was anchored with gold. Notice God’s intent to underwrite this metal Psalm 19:10. God's judgments are "more desired than gold, yes than much fine gold." The word “fine” still appears on today’s gold bars.

This being the case, how (except perhaps for a short period of time such as after the Bre-X scandal in 1997) will God allow gold to become commonplace. Overall, I believe God will not allow the value of this comparative benchmark to become insignificant. It would be ludicrous for God to say, "My Word is more valuable than wood." It seems to me that God has committed Himself to sustaining the value of gold despite the words of some very intelligent but misguided economists such as John Maynard Keynes who said that the "gold standard is a barbarous relic."  Now Keynes is the relic. Recently the Chinese expressed the need for a new global reserve currency and gold might just be used for that purpose. [Hint – do we put more effort into acquiring gold or into knowing and obeying God’s Word?]

For those familiar with end-times prophecy there is yet another reason to hold gold. Some scholars interpret the mark of the Beast, on the forehead or right hand, as a method of world domination through restricting commercial transactions. If this unfolds in the way Revelations 13:15-18 describes it, then those who hold gold would likely be more able to operate in an underground economy than those who have none.

I'm not advocating greed or a love of money. I'm merely pointing out that God will NOT allow gold to become a base commodity. Therefore from a Biblical perspective it seems wise to hold at least some to diversify our investment portfolio. I like to use gold funds as a hedge against traditional equities for diversification purposes. I advise caution, though, as the spot price of gold can be very volatile. 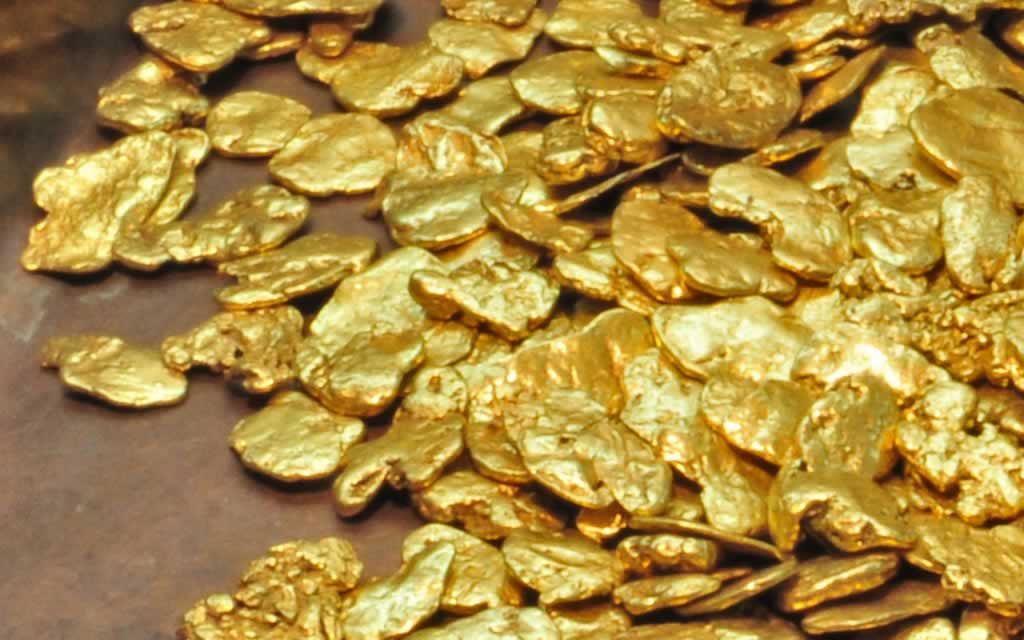 Having written all those good things about the rise in the value of gold we must counterbalance. Remember that any financial gains from the purchase and sale of gold are subject to income taxes. The Bible is also crystal clear that we must NOT love or trust gold. “He who trusts in his riches will fall but the righteous will flourish like a green leaf,” Prov. 11:28. Furthermore there is a time coming when silver and gold will be dumped like garbage. Ezekiel 7:19 describes people who detest and discard their gold and silver. What they treasured will be trashed. Something once loved is now hated! Does this sound ridiculous? Think again. Under certain conditions gold and silver are totally worthless. For example, in times of famine you can’t buy food with any amounts of silver or gold. The Bible gives us even more warnings in the words of Peter and James who actually walked with Jesus. Peter tells us that gold is like yogurt; it is perishable; it has a best before date. James sounds the alarm for those who trust in their wealth saying that gold and silver become worthless when the Lord Jesus returns. “Riches do not profit in the day of wrath but righteousness delivers from death,” Proverbs 11:4.

Thus, if you are fully cognisant of these cautions and if you are considering using gold and silver as investments, look carefully at the Bullion Management Group. Bullion Management Group (BMG) is a mutual fund company that invests 1/3 gold, 1/3 sliver, and 1/3 platinum. Its claim to fame is in its direct holding of the bullion itself, rather than holding mere certificates. BMG does not have any “compromised” holdings and does not own any mining companies. I own it and sell it.

In summary gold is great to use as an investment tool to diversify a temporary planet-earth portfolio, but not to trust and certainly not to love. God’s power always trumps gold’s power.

Tags:
managing money gold trust
The Three Biggest Money Myths
The Cost of Something for Nothing

Investing During the Great Reset Robbery

Put your trust in God - not gold